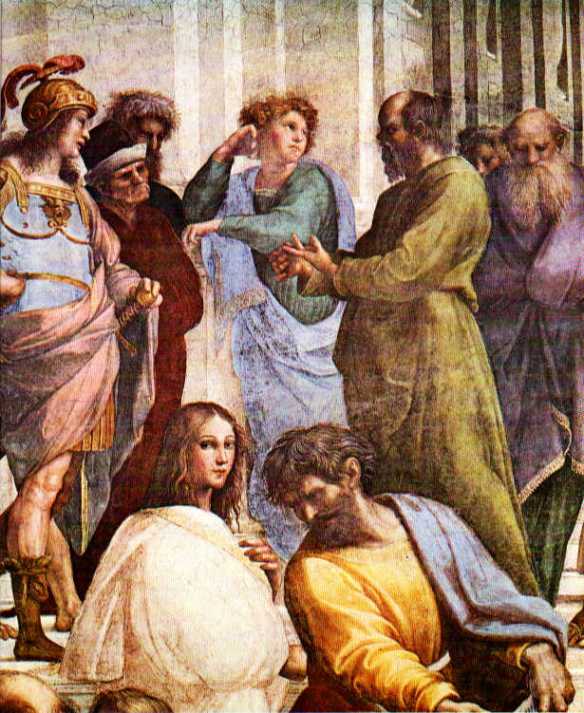 Socrates, from Raphael’s “School of Athens”

Recently, I was talking to a friend (and fellow blogger) who teaches Physics. In the course of our conversation after I observed her (inspiring) class, she said to me, “I never ask students a question they don’t have the tools to answer.” This statement gave me some pause. I thought to myself – only half in jest – I never ask my students a question they are able to answer.

What is the purpose of the questions we ask in class? That seems like a question requiring more than one blog post, but I do want to lay out some preliminary thoughts here, based on my observation of this Physics class and my subsequent reflections on my own courses.

I observed my friend Kelly O’Shea’s 10th grade Physics class a few weeks ago. They spent much of their time organizing different schema they had for solving various types of Physics problems. Groups of students were given white-boards and then asked to arrange the different models they use to solve problems in such a way that represented their relationships to each other. From my perspective, the task seemed brilliant: students were thinking (this doesn’t always happen in class), talking to each other, organizing their knowledge and trying to arrange it. It was a powerful display of teaching and learning.

With a few minutes left, Kelly introduced the class to a contraption that is a bit like an air-hockey puck: it floats over the ground and moves without friction. She asked the class to consider a situation: the disc was moving in one direction in a straight line, and then she tapped the disc at a right angle. What would happen? Would the disc move at a right angle, perpendicular to the original direction? Continue on an angle at a straight line? Curve in parabolic motion?

The class was a bit uncertain, and she asked them to talk amongst themselves for the few remaining minutes before the period ended. She wanted the students to have a clear idea in their heads about what would happen and a clear reason for why it would happen that way. (Another benefit of this approach: it works so well with the [often-unexamined] background knowledge and physical intuition students bring into class.)

After class, Kelly and I talked about the lesson. She explained to me that even if all of them did not realize it at that moment, the students had enough physics knowledge to be able to answer the question Kelly had asked them. She told me that she does not set her students up to fail, and only asks them questions that they have the tools to answer.

That week, it turned out, I was beginning two new classes: one about Bioethics and the other about Asian Religions. For a range of reasons (including the tie-in to “The Matrix” that it provides), I actually begin my Asian Religions course with Plato’s “Allegory of the Cave.” (I know: not Asian, and not religion. I’ll address this in a later post.) After we spent some time discussing and drawing the cave, and getting as clear as possible about what Plato was saying, I turned to the students and asked them: Are you in the Cave? How do you know? How would you know?

As you might imagine, there were a range of responses: Yes, absolutely; No, absolutely not; I don’t know – how could I?; I don’t want to know; The cave is more comfortable – I probably am, but ignorance is bliss. Some students, both this year and in the past, wanted to know why I was asking the question at all – it was an unanswerable question, they said, and one they found unsettling. Others replied with a sense of genuine curiosity, as if something real was at stake in the question.

These questions – Are you in the cave? How do you know? – are, I would argue, in many ways unanswerable. Not ultimately so, but certainly for the second or third day of a high school philosophy or religion class. And in many ways, that’s the point. My goals seem opposite to Kelly’s here: I’m not trying to give my students a sense of mastery or even competence. If anything, I’m trying to orient them to a different way of thinking about and relating to the world and to their education, and it’s one that ideally introduces some uncertainty into the learning process.

When was the War of 1812? How many protons are in a Hydrogen atom? What’s the past tense of avoir? The cube root of 27? These are often the kinds of questions students get asked during the course of a school day: factual questions without much room for creative thinking or interpretation. (By contrast, Kelly’s class asked students to think in a range of different ways.) I start almost all of my courses with the “Allegory of the Cave” because there isn’t a single or simple answer to the questions that it raises. And, with a bit of luck in the classroom – some inquisitive students, a few metaphors that take hold, a sense of openness and possibility – it can lead to real questioning and inquiry.

And it’s from that state of wonder and curiosity, I’d argue, that the real work of philosophy and religious studies can begin: we can then begin to look at different kinds of questions and explore them across geographic space and historical time. Who am I? What does it mean to be happy, or to be free? What, if any, are my responsibilities to others? How do I know what I know?

These are questions that my students aren’t yet able to answer. And, in many ways, that’s the point. I’m trying to create a forum where we can discuss them, examine them, play around with them – they are the questions students will be living with (answerable or not) for the rest of their lives.